We are a computational biology lab interested in how genetic variation and subsequent molecular mechanisms contribute to diversity within and between species. We work to understand the social impacts of technologies based on genetic variation, as well as how social context shapes scientific inquiry. This manifests as three lines of research: 1) investigating the reliability of forensic genetic models and methods, as well as the impact of assumption violations; 2) developing and applying statistical models to determine the role of genome regulation in adaptation; and 3)  clarifying how systems of oppression influence science, and shifting systematic norms to promote social justice within science. 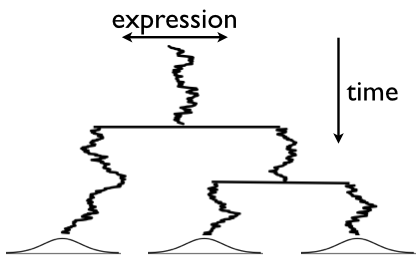 Comparative analyses across species of gene expression have confirmed the prominence of expression changes in adaptive processes. Yet, the molecular basis of most specific adaptations remains unclear. Comparative transcriptomic analyses including alternative splicing, plasticity, and genome duplication promise to reveal functional adaptive changes. We develop statistical methods to test evolutionary hypotheses using these new data, while accounting for limitations of the data. We further consider the role of small structural variants in causing adaptive changes in gene expression.

Science suffers from homogeneity of scientists, with the most extensively documented underrepresentations for persons excluded because of ethincity or race (PEERs) and persons excluded because of gender (PEGs). We seek to better understand the experiences of PEERs and PEGs in science, and to shift scientific systems and culture to center and empower PEERs and PEGs. We do this work through multiple approaches, for instance, we investigated how the underrepresentation of women in computational sciences has been exaggerated by biased authorship practices. In another example, we analyze faculty hiring data to identify practices that support the creation and maintenance of diverse science departments. For a third example, we work to understand of the historical relationship between our field and eugenics, in order to learn about the present-day relationships between genomics research and sociopolitics. All the while, we develop programs (like the Summer Program and GOLD) to change the culture and practice of academic science.